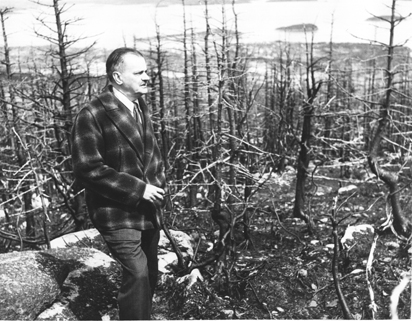 [Investigations concerning the presence or the absence of extracellular tumor agents in malignant tumors of the rat and of the mouse.], P R. Borges

Morphogenetic studies in the rabbit. VI. Genetic factors influencing the ossification pattern of the limbs., D D. Crary and P B. Sawin

An attempt to demonstrate neutralizing antibodies to the mammary tumour "milk agent" in mice., P A. Gorer and L W. Law

Studies on the mouse mammary tumor agent. III. Survival and propagation of the agent in transplanted tumors and in hosts that grew these tumors in their tissues., K P. Hummel and C C. Little

Studies on the mouse mammary tumor agent. I. The agent in blood and other tissues in relation to the physiologic or endocrine state of the donor., K P. Hummel and C C. Little

Relationship between dominance and control of movement in goats., S Ross and J P. Scott

Analysis of pleiotropism of the W-locus in the mouse: relationship between the effects of W and Wv substitution on hair pigmentation and on erythrocytes., E S. Russell

A quantitative histological study of the pigment found in the coat-color mutants of the house mouse. III. Interdependence among the variable granule attributes. IV. The nature of the effects of genic substitution in five major allelic series., E S. Russell

The adrenal cortex and its tumors., G W. Woolley

A twelfth linkage group of the house mouse., R A. Fisher and G D. Snell

Individual differences in the reactivity of dogs., J L. Fuller

Studies on the genetic and antigenic basis of tumour transplantation: linkage between a histocompatibility gene and "fused" in mice., P A. Gorer, S Lyman, and G D. Snell

A quantitative histological study of the pigment found in the color mutants of the house mouse. II. Estimates of the total volume of pigment., E S. Russell

A study of the physiological genetics of coat color in the mouse by means of the dopa reaction in frozen sections of skin., L B. Russell and W L. Russell

Morphogenetic studies of the rabbit. V. Inheritance of an asymmetrical vascular pattern., P B. Sawin and M A. Nace

Methods for the study of histocompatibility genes., G D. Snell

Organophilic tendencies of two transplantable tumors of the mouse., A M. Cloudman

Differences in the effect of uterine environment upon development in the dba and C57 black strains of mice., E Fekete

Antibody response to tumor inoculation in mice with special reference to partial antibodies., P A. Gorer

The effect of gonadectomy and adrenalectomy on the appearance and incidence of spontaneous lymphoid leukemia in mice., L W. Law

The genetics of cancer in mice., C C. Little

A reverse mutation to a "remote" allele in the house mouse., C C. Little and K P. Hummel

The mammary gland development in male mice at nine weeks of age., F L. Richardson and A M. Cloudman

Development of mouse eggs in the anterior chamber of the eye., M N. Runner

Formation of a committee for the study of animal societies under natural conditions., J P. Scott

The conference on genetics and social behavior at the Roscoe B. Jackson Memorial Laboratory., J P. Scott

Lack of correlation between leadership and dominance relationships in a herd of goats., J C. Stewart and J P. Scott

Linkage studies with the pirouette gene in the mouse., M M. Dickie and G W. Woolley

A comparative study of the ovaries of virgin mice of the dba and C57 black strains., E Fekete

Anomalies in the small intestine and cecum of inbred strains of mice., M A. Kelsall

A quantitative histological study of the pigment found in the coat color mutants of the house mouse. I. Variable attributes of the pigment granules., E S. Russell

An analysis of translocations in the mouse., G D. Snell

Relationships of lymphocytes and cancer., M A. Kelsall

Abnormalities of the mammae in the house mouse., C C. Little and H McDonald

Linkage of jittery and waltzing in the mouse., G D. Snell

A chromosome map of the mouse., Staff of the Roscoe B Jackson Memorial Laboratory

The incidence of adrenal cortical carcinoma in gonadectomized female mice of the extreme dilution strain. I. Observations on the adrenal cortex., G W. Woolley and C C. Little

The incidence of adrenal cortical carcinoma in male mice of the extreme dilution strain over one year of age., G W. Woolley and C C. Little

Cancer, a Study for Laymen

Some remarks about the Aschheim-Zondek pregnancy tests., E Fekete

A case of hermaphroditism in the mouse., E Fekete and L B. Newman

Facing the challenge of a new era., C C. Little

Parental influence on the incidence of cancer., C C. Little

Reactions of hybrid and parabiontic pseudo-hybrid mice to inoculations of tumor C198., A M. Cloudman

Hyaluronidase in the fertilization of mammalian ova., E Fekete and F Duran Reynals