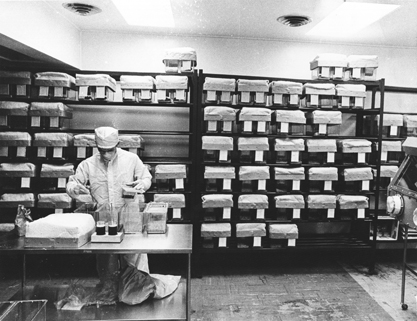 Etiologic considerations of spontaneous tumors in animals with special reference to the endocrine system., H Meier

Locomotor activity and oxygen consumption; variability in two inbred strains of mice and their F1 hybrids., K Schlesinger and A M. Mordkoff

Conditioning in the neonatal puppy., W C. Stanley, A C. Cornwell, C Poggiani, and A Trattner

The effects of unavoidable shocks on a multiple schedule having an avoidance component., M B. Waller and P F. Waller

Some relationships between early experience and later social behavior in ducklings., P F. Waller and M B. Waller

Choice of animals and sensitivity of experiments., C K. Chai

Effect of genic substitution on the incorporation of tyrosine into the melanin of mouse skin., D L. Coleman

Interaction of olfactory and other environmental stimuli on implantation in the deer mouse., B E. Eleftheriou, F H. Bronson, and M X. Zarrow

Acetoacetate metabolism in muscle homogenates from normal and dystrophic mice., A B. Gould and D L. Coleman

Tottering, a neuromuscular mutation in the mouse and its linkage with oligosyndactylism., M C. Green and R L. Sidman

Recessive buphthalmos in the rabbit., B Hanna, P B. Sawin, and L B. Sheppard

Induction of the homograft reaction in the presence of immunological enhancement of tumor homografts., N Kaliss

The elements of immunologic enhancement: a consideration of mechanisms., N Kaliss

Enzymatic reduction of the W7 bond of 7-dehydrocholesterol., A A. Kandutsch

Progress in the chemistry of transplantation antigens., A A. Kandutsch and J L. Stimpfling

Morphogenetic studies of the rabbit. XXXI. Weights an linear measurements of some of the bones of 65 race III rabbits., H B. Latimer and P B. Sawin

Some aspects of experimental and spontaneous tumorigenesis in animals., H Meier

The zymogram technique as a tool for study of genotypic differences., H Meier, E Jordan, and W G. Hoag

A strain difference in response to the teratogenic effect of maternal fasting in the house mouse., J R. Miller

Maturation of the hemagglutination response in mice., M Moulton and J B. Storer

The operant control of vocalization in the dog., K Salzinger and M B. Waller

Genetics and the development of social behavior in mammals., J P. Scott

The biology of teratomas including evidence indicating their origin from primordial germ cells., L C. Stevens

The biology of teratomas including evidence indicating their origin from primordial germ cells., L C. Stevens

Evaluation of radiation response as an index of aging in mice., J B. Storer

Effects of chlorpromazine on appetitive and aversive components of a multiple schedule., M B. Waller and P F. Waller

Injection of the arterial system of the mouse., W T. West and Gorham L. Whittington

The influence of propylthiouracil and thryoxine on superovulation in immature mice., E D. Wilson and C K. Chai

The participation of complement in isoimmune reactions., H J. Winn

A technique for staining chromosomes of the mouse with Sudan Black B., M C. Bunker